The American Council of Learned Societies is a nonprofit federation of 79 scholarly organizations dedicated to supporting the development and promoting the circulation of humanistic knowledge throughout society. As the preeminent representative of American scholarship in the humanities and interpretive social sciences, ACLS holds the core belief that knowledge is a public good.

In addition to stewarding and representing its member organizations, ACLS employs its $180 million endowment and over $30 million annual operating budget to support humanistic scholarship to advocate for the centrality of the humanities and interpretive social sciences in the modern world.

ACLS was created in the wake of World War I as European statesmen sought to rebuild civil society’s fractured international connections. In this spirit, leading humanities scholars set out to forge an international federation of academies that would foster collaboration to strengthen the field. Representatives from 10 learned societies established a coalition to represent the United States at a meeting to plan what became the Union Académique Internationale (International Union of Academies) in spring 1919 in Paris.

On September 19, 1919, delegates from ten scholarly societies convened at the American Academy of Arts and Sciences in Boston. The group envisioned an organization that would represent American scholarship abroad while also tackling critical issues affecting the humanities at home, particularly the challenge of securing a place in the emerging research culture at US universities. The new American Council of Learned Societies stated its mission as “the advancement of humanistic studies in all fields of the humanities and social sciences and the maintenance and strengthening of national societies dedicated to those studies.”

Those founding scholarly societies include a number of current members:

ACLS began awarding fellowships and grants to individual scholars in 1926. That year, drawing on funds from one of the Rockefeller philanthropies, the ACLS Committee on Aid to Research distributed grants of up to $300 each to 21 applicants “engaged in constructive projects of research and who are in actual need of such aid and unable to obtain it from other sources.”

ACLS has a long history of encouraging the exploration of new subjects and methodologies in humanistic research. From its earliest days, ACLS has convened committees to discuss, debate, and encourage the development and advancement of countless fields. The work of these committees helped establish and strengthen African American studies, intellectual history, musicology, the history of religions, Native American languages, and China studies. 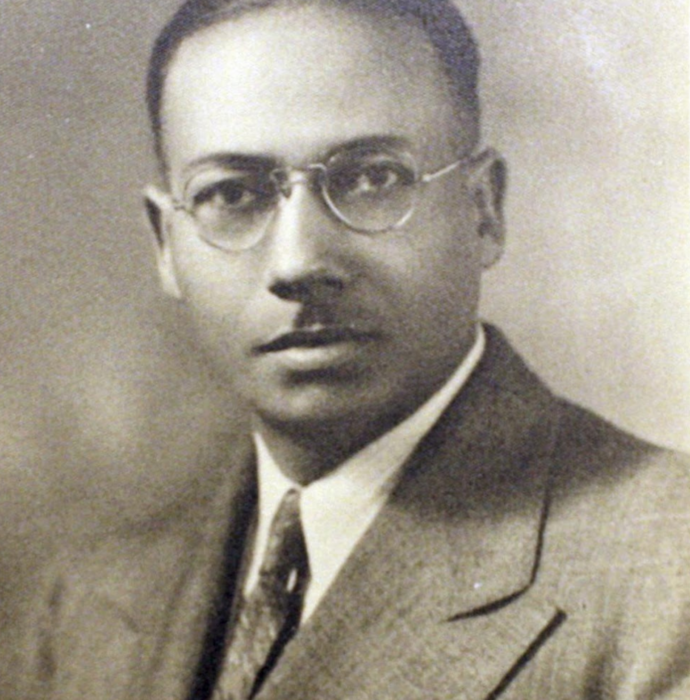 Lorenzo D. Turner F’32, a linguistics scholar and professor of English at Fisk University, received an ACLS award to produce a descriptive grammar of the Gullah dialect, the unique creole language of the coastal islands and adjacent mainland of South Carolina and Georgia.

Turner’s landmark publication, Africanisms in the Gullah Dialect, is credited with lifting this linguistic phenomenon from the shadows that had obscured the history of Gullah. Turner subsequently created African studies programs at several historically Black universities.

Meeting the Needs of a Rapidly Changing World

In 1943, ACLS published Liberal Education Re-Examined: Its Role in a Democracy. Inspired by a symposium on the future of humanistic studies at the 1938 annual meeting and written by a team of leading scholars, the book presented a forceful argument: “The importance of liberal education can hardly be exaggerated. The war which is now being waged involves…a conflict between two radically divergent philosophies…If democracy is to make headway against authoritarianism, it must rely on a form of education which is as effective for the promotion of democratic ideals and the liberal spirit as propaganda has been effective for the achievement of authoritarian ends…Whoever believes in democracy must believe in the value and dignity of the individual, and whoever believes in this must believe that the disciplines which deepen and personalize human individuality should be allotted a central role in a liberal curriculum.”

In January 1943, as the destruction of World War II spread across Europe, North Africa, and Asia, the American Council of Learned Societies established the ACLS Committee on the Protection of Cultural Treasures in War Areas. The committee marshaled the combined scholarly expertise of ACLS’s membership to guide men and women serving in the Allied Forces’ Monuments, Fine Arts, and Archives section, known as the “Monuments Men,” in the protection and recovery of art, monuments, and other treasured cultural heritage threatened by the ongoing conflict. 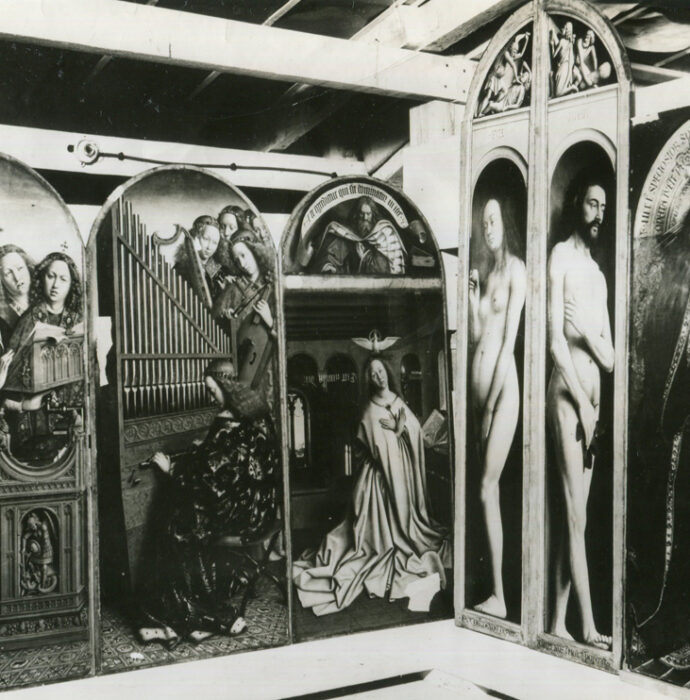 ACLS created the committee that became the research engine of the Commission for Preservation of Cultural Treasures in War Areas, know today as the “Monuments Men.”

ACLS entered a time of renewal and resurgence in 1957. Under the leadership of new president Frederick Burkhardt, the organization moved its headquarters from Washington, DC, to New York City, invited colleges and universities to join as Associate members, and focused programming on research fellowships for a growing professoriate.

The National Commission on the Humanities

In 1963, ACLS joined with the Council of Graduate Schools in the United States and the United Chapters of Phi Beta Kappa to establish the National Commission on the Humanities to conduct a study of the state of the humanities in America. On February 26, 1965, ACLS President Frederick Burkhardt testified before the Special Subcommittee on Arts and Humanities of the Senate and the Special Subcommittee on Labor of the House of Representatives about the committee’s findings. 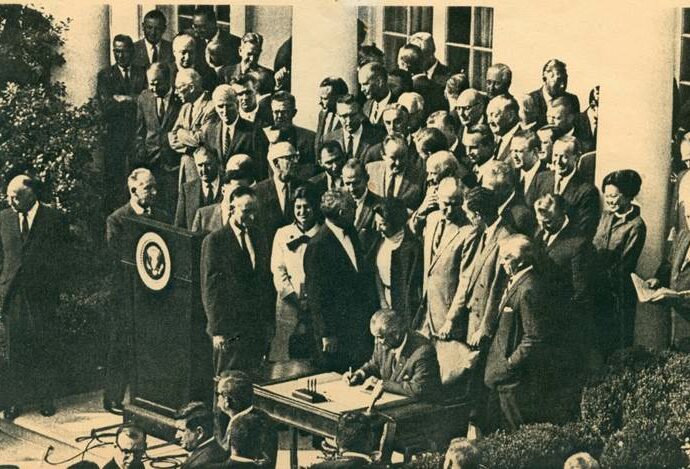 The 1964 Report of the Commission on the Humanities recommended “the establishment by the President and the Congress of the United States of a National Humanities Foundation.”

In 1985, ACLS published its Report to Congress on the State of the Humanities and the Reauthorization of the National Endowment for the Humanities.

In 1973, then ACLS president Frederick H. Burkhardt joined a delegation of US academic leaders to China, the first such delegation to visit the nation in more than three decades. The collaborative efforts of the Committee on Scholarly Communication with China resulted in opportunities for study in the US and China for more than 1,000 American and Chinese scholars.

In 1992, ACLS joined an effort to reestablish US scholarly connections with Vietnam, which included a new Fulbright fellowship program in Vietnam. The ACLS Center for Educational Exchange with Vietnam (CEEVN) became a subsidiary of ACLS in 1994 and went on to manage more than $45 million in grants and fund nearly 2,000 fellowships, study tours, and grants to Vietnamese scholars and institutions until its conclusion in 2020.

With funding from the Carnegie Corporation of New York, between 1999 and 2010, the ACLS Humanities Program in Belarus, Russia, and Ukraine supported humanities scholars doing exemplary work in the former Soviet Union during a time of crisis, so as to assure continued future leadership in the humanities.

In 2008, ACLS and the Carnegie Corporation of New York launched the African Humanities Program (AHP), supporting individual humanistic scholars in Ghana, Nigeria, South Africa, Tanzania, and Uganda while also fostering networks of colleagues across the continent.

In 2014 ACLS launched the Program in Buddhist Studies, funded by The Robert H. N. Ho Family Foundation, a global fellowship and grant competition designed to promote the academic study of Buddhism and the dissemination of knowledge of Buddhism through support for dissertations, research, and writing, and by assisting institutions to establish new, tenure-track teaching positions.

Discover More About Our Impact

ACLS has played essential roles in establishing pivotal committees, convenings, and learned societies that have influenced the shape of American and international higher education over the past century.