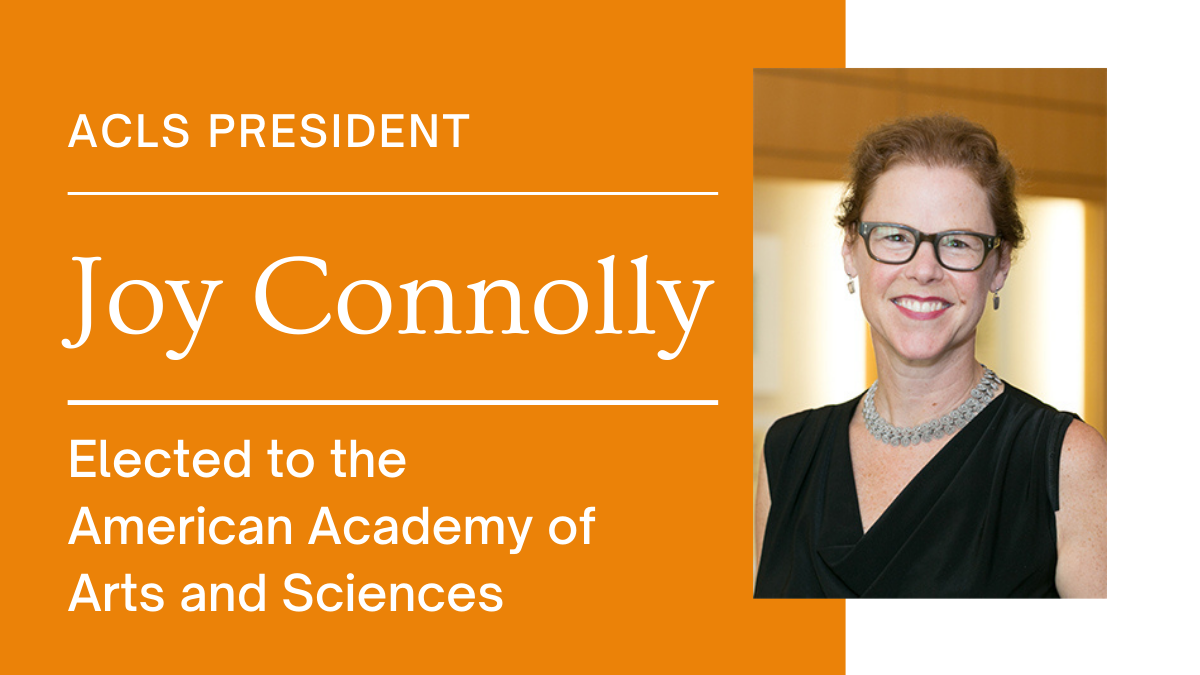 The American Council of Learned Societies (ACLS) is pleased to celebrate President Joy Connolly’s election to the American Academy of Arts and Sciences, one of the oldest and most esteemed honorary societies in the United States.

Connolly joined ACLS, a leading supporter of American scholarship in the humanities and interpretive social sciences, in 2019 after serving as interim president and provost of The Graduate Center of The City University of New York, and as distinguished professor of classics.

“ACLS is honored and thrilled that Joy has been elected to the American Academy of Arts and Sciences,” said ACLS Board Chair William C. Kirby. “The important strides Joy has made in galvanizing students, faculty, independent scholars, administrators, and supporters around strengthening and advancing humanistic study for the 21st Century makes her an outstanding addition to the academy.”

“We are honoring the excellence of these individuals, celebrating what they have achieved so far, and imagining what they will continue to accomplish,” said David Oxtoby, President of the American Academy. “The past year has been replete with evidence of how things can get worse; this is an opportunity to illuminate the importance of art, ideas, knowledge, and leadership that can make a better world.”

The important strides Joy has made in galvanizing students, faculty, independent scholars, administrators, and supporters around strengthening and advancing humanistic study for the 21st Century makes her an outstanding addition to the academy. William C. Kirby

Connolly is a scholar of ancient Roman rhetoric and political thought and their enduring influence in modernity. She joined ACLS after serving as provost and interim president of The Graduate Center of The City University of New York, the principal doctorate-granting institution of the nation’s largest public urban university. Prior to joining CUNY, she was dean for the humanities in the Faculty of Arts and Science (2012-2016) and director of the College Core Curriculum at New York University (2009-12).

She is also the author of two books, The State of Speech and The Life of Roman Republicanism, and over seventy articles, book reviews, and essays. She currently serves on the board of the National Humanities Alliance, the National Humanities Center, Middlesex School, and the Journal for the History of Ideas, and serves on advisory groups for Imagining America, the Council of Graduate Schools, and Humanities Indicators, a project hosted by the American Academy of Arts and Sciences. Her writing has appeared in the Village Voice, The Times Literary Supplement, the Chronicle of Higher Education, Bookforum, The Nation, and Inside Higher Ed.  She speaks and writes regularly about the future of the humanities, the significance of studying the past, and the necessity of public funding for higher education as a keystone of a robust democracy.

Connolly earned an AB in classics from Princeton University in 1991 and a PhD in classical studies from the University of Pennsylvania in 1997.