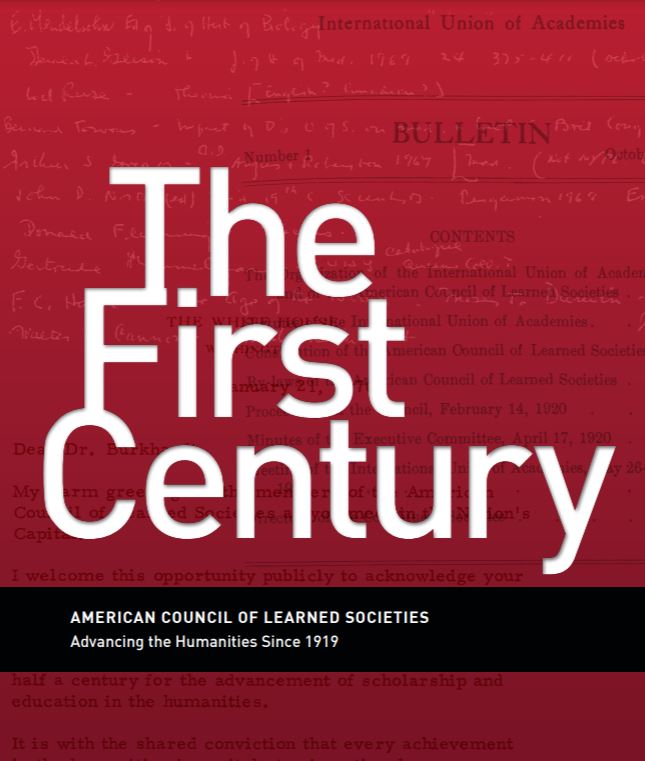 Marking its centennial year has provided ACLS an opportunity to reflect on its origins and evolution, to take stock of accomplishments, and to share some thoughts on where it is heading. This publication is not a comprehensive portrait. Necessarily synoptic, it cannot fully chart the many projects, personalities, issues, and ideas that are part of the Council’s history.  It is meant to be an introduction to the ACLS story and the different strands of its work.

The narrative is thematically organized to provide a sense of the scope of these endeavors over one hundred years and to highlight  some illustrative examples of programs that advanced the Council’s goals.

Chapter One: Advancing the Humanities For 100 Years

This chapter sketches ACLS’s history—its founding purpose, early years, evolution and critical turning points, including the Council’s near extinction and renewal in the 1950s. The history is placed in the broader context of the challenges the humanities have faced through the years as well as the critical public contribution of humanities scholars. The overview touches on all the themes that will be explored more fully in the chapters that follow, including the programs ACLS developed and their outcomes and its work with an ever-expanding roster of member learned societies that seeded and strengthened new fields of scholarly inquiry.

Research fellowships are the primary means for producing knowledge in the humanities. Awarding fellowships through rigorous peer review has been a component of ACLS’s work since the 1920s, moving to the center of the Council’s work after its re-founding in 1957, and growing exponentially in the twenty-first century. ACLS programs today represent the United States’ largest single source of portable research fellowships in the humanities and interpretive social sciences. This chapter looks at the process of  awarding fellowships, the difference they have made to individual fellows and fields, and several illustrative fellowship programs . It also spotlights ACLS’s development of critical scholarly resources, which has spanned many decades.

ACLS has a long history of encouraging the exploration of new subjects in humanities research. This work has been grounded in the premise that knowledge is always changing and that its place in departments, fields, and curricula was historically conditioned and is by no means static. This chapter examines the collaborative research-planning process that seeded new fields of scholarly inquiry and strengthened others that were emerging. It also includes ACLS support to help scholars engage new research methods, from computer-oriented research in the 1960s to the use of twenty-first century digital technologies.

The creation of knowledge is ACLS’s abiding purpose. The Council has consistently sought to make that knowledge available not just to scholars and to students, but also to policymakers and others seeking the insights and expertise that the humanities provide. This chapter focuses on ACLS’s public role, which became particularly significant when there was a critical need for scholarly expertise just before and during World War II, and highlights  several subsequent  projects, including an international exploration of comparative constitutionalism and the Mellon/ACLS Public Fellows program that positions recent humanities PhDs to apply their analytical and research skills in workplaces outside the academy.

ACLS’s support in the United States for the study of other countries and regions expanded greatly through the decades.  At the same time, it has sought to build international channels that would enable scholars in different countries to connect, conduct research, and share knowledge across political and cultural borders. This chapter examines the range of this work – including, at different times, establishing scholarly exchanges with countries that were politically estranged from the United States, such as the Soviet Union and Eastern Bloc during the Cold War, the People’s Republic of China, and Vietnam—as well as later programs that developed a new paradigm of international scholarship.

Chapter Six: Advocating for the Humanities

Representing the humanities to policymakers, foundations, and the public has been a critical part of ACLS’s history. This advocacy has taken different forms, often responding to, or anticipating, specific needs of the field as well as changes in the political environment that affect the teaching and study of the humanities. This chapter features key accomplishments, such as the creation of the National Endowment for the Humanities, as well as ACLS’s response to congressional attacks in the 1950s, campus turmoil in the 1960s, and the “culture wars” of the 1970s and 80s.

Modern learned societies emerged in the late nineteenth century to provide the nervous system for a new, more muscular body of higher education taking shape in the United States during that period. Since ACLS’s founding in 1919, the number of its member societies has grown from the original ten to the current seventy-five that represent a wide range of fields and concerns. This chapter focuses on the critical role and expanding activities of the scholarly associations, how they operate and interact, and current challenges  as they pursue their mission to advance research, improve teaching, and bring to the public the results of scholarship.

ACLS is the oldest of the few national institutions dedicated to putting humanities scholarship in the foreground of higher education and society. While ACLS’s leadership role has remained steady, its work continues to evolve. This chapter shares the principles, priorities, and goals that will guide its work over the next decade.