For Meena Nayak F’19, Professor of English at Northern Virginia Community College, her students were a main source of her research inspiration. In teaching about masculine and feminine divines in Hindu mythology, she often received questions about the existence of any myths about homosexuality or non-binary genders, leading her to start exploring the idea.

Her interest in the subject piqued in fall 2018, when she was working on her book, Blue Lotus: Myths and Folktales of India. At the same time, the Supreme Court in India was deciding on a case to lift the ban on homosexuality, which had been in place since 1861 when homosexual activities were criminalized under British rule. During this period of tense public debate on the topic, Nayak saw a connection between her recent discoveries of Hindu myths that reference multiple genders and sexualities.

“Many in modern Indian society saw homosexuality as reprehensible behavior influenced by the West,” Nayak said. “The irony of that situation was striking. India has a living mythology, and myths which are thousands of years old are the core of Hindu belief systems; hence the idea that homosexuality was a ‘new,’ Western construct was ludicrous.”

A few weeks after the Indian Supreme Court decriminalized homosexuality on September 6, 2018, Nayak submitted her application for the Mellon/ACLS Community College Faculty Fellowships, which recognize humanities and interpretive social science faculty who teach at two-year institutions and their vital contributions to scholarship, teaching, and their communities. For Nayak, who was awarded the fellowship in 2019, it provided vital resources needed to begin her research. That included travel to India to examine primary texts that are often difficult to obtain in the United States. While researching at Indian universities and libraries, she also gained access to secondary sources that expanded her perspectives on these ancient Hindu texts.

Equally important was the ability to have a slightly reduced teaching load, particularly during the COVID-19 pandemic, when learning to teach virtually required extra time and energy. Nayak encourages future fellows to budget for a lighter course load, acknowledging that taking time off for research projects can be challenging at a teaching-intensive university.

“My project is research-based, and research endeavors are not often explored in community colleges,” she explained. “Those faculty who pursue discipline-based research, do it for their own benefit, or, simply for the love of it.”

She is now working on a book based on the research supported by the fellowship that explores homosexual and transgender identities in fifteen Hindu myths analyzed from the perspectives of the religion, history, philosophy, psychology, and socio-cultural milieus that impacted them. The working title, “The Third Color in Indra’s Bow,” is word play on myth and social practice. In Hindu myth, Indra is the god of rain, lightening, and thunder, and the word for rainbow in Sanskrit and Hindi is indradhanush, or Indra’s bow, so the title references both a third gender and the rainbow symbol of LGBTQ+ pride. 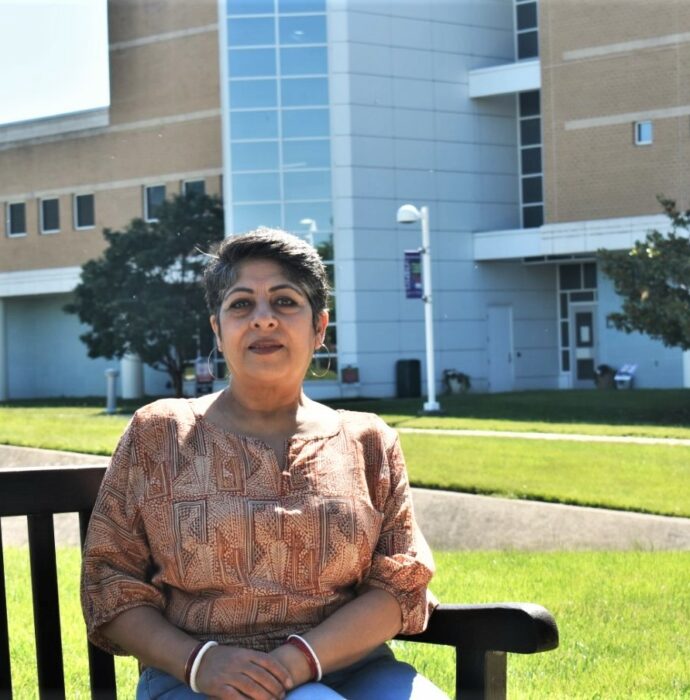 “My project is research-based, and research endeavors are not often explored in community colleges. Those faculty who pursue discipline-based research, do it for their own benefit, or, simply for the love of it.”

Nayak found that a third gender is referenced numerously in many ancient foundational Hindu texts, which include texts of mythology, such as the epics and the Puranas, as well as texts of social law. She also noticed that myths about homosexual and transgender identity and transsexuality are aplenty.

“In most of these myths, the key players are the gods, as is the nature of myth, but since myth is a paradigm of human behavior, one can make the assumption that what happens in the divine realm becomes customary in the terrestrial world,” she said.

While Nayak originally hoped to employ the myths as evidence to uncover the socio-cultural history of LGBTQ+ people in India, her research has led her to believe that a reversal in perspective may prove to be more efficient.

“My key learning is that while transgender and homosexual figures were certainly part of ancient Indian society, their delineation in ancient Hindu texts is complex and multi-layered, and to fully grasp them, I may need many more years of research,” she noted.

However, the research she has been able to conduct has given her content and tools to create a book proposal, as well as include this topic in her teaching.

“I have been teaching this theme successfully for two semesters now,” Nayak said. “My students really engage with it, because they can relate to it; it enables them to see how the agency of myth actuates societal norms that are prevalent in their world.”

Read excerpts from Nayak’s first book as part of our LGBTQ+ Resource List.

Community colleges are a vital component of the higher education ecosystem and of the academic humanities in particular. Mellon/ACLS Community College Faculty Fellowships support the research ambitions of humanities and social science faculty who teach at two-year institutions.