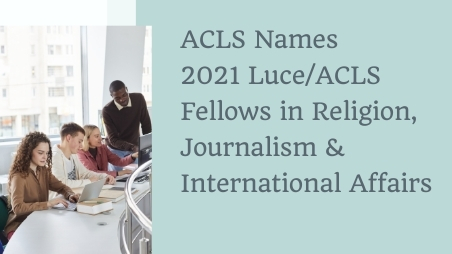 The American Council of Learned Societies (ACLS) is pleased to announce the 2021 Fellows of the Luce/ACLS Program in Religion, Journalism & International Affairs. The fellowships support exceptional scholars in the humanities and social sciences who are pursuing research on the roles religion plays in public life around the world and who are poised to enrich public understanding of religion through media engagement. The program is made possible by the generous support of The Henry Luce Foundation.

“The humanities and social sciences give voice to key perspectives on religion, which exerts deep influence on what people all over the world believe about family and state structure, gender roles, the nature of divinity, and the characteristics of the best life,” said ALCS President Joy Connolly. “As our society continues to reckon with the urgent need for social justice and greater respect for difference amidst deep polarization, the timely research led by these scholars helps create paths to richer understanding of one another.”

Awardees receive stipends of $63,000 to implement their projects. In addition to providing fellows with a year’s leave to pursue their research and outreach efforts, the program also offers media training activities, and hosts a spring symposium that brings journalists into dialogue with scholars to discuss key issues in religion and international affairs.

This year’s fellows explore connections between religion and public health, environmental change, the rights of Indigenous Peoples, foreign aid, broadcast media, and more. This year’s six fellows and projects are:

For more information about the Henry Luce Foundation and its grantmaking, visit the Foundation’s website here.